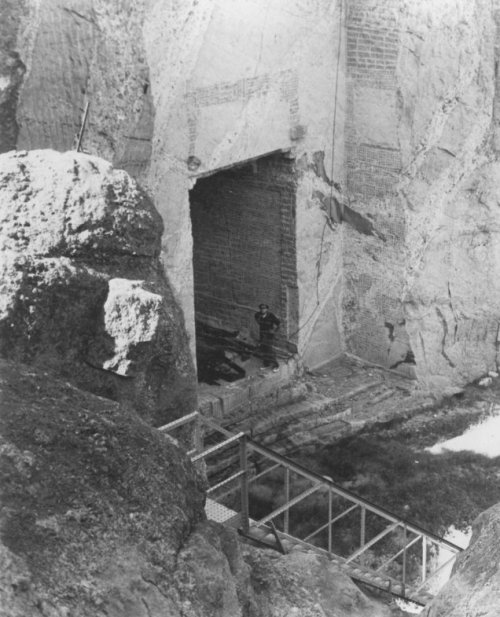 Photo of the started “Hall of Records” at Mt. Rushmore Secret tunnel – Mt. Rushmore’s Hall of Records – This entrance to the hall in the canyon behind the presidents’ heads was carved in 1938 by the original designer of Mt. Rushmore, Gutzon Borglum.  However, the project was halted in 1941 when Borglum died in a minor surgery. But in 1998, the National Park System along with the Borglum family put the finishing touches on the Hall of Records. The original 80’ x 100’ room was not carved, but a titanium vault, housing a teakwood box was installed in the granite floor in the entrance way. The box contains sixteen porcelain enamel panels. On these panels are written the words of the Constitution, the Declaration of Independence, a history of how and why Mount Rushmore was carved, a history of the four presidents with quotes from each, a biography on Gutzon Borglum, and the history of the United States. The capsule is sealed with a granite capstone.