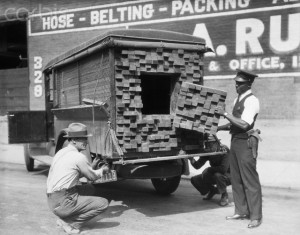 23 Oct 1926, Los Angeles, California, USA — Original caption: 10/23/1926-What appeared to be an innocent truckload of lumber, turned out to be a bootlegger’s vehicle loaded with prime scotch when the Los Angeles Federal Prohibition Agents smelled the odor of a broken bottle. Investigation disclosed a cleverly conceales trapdoor of board ends leading to the interior, from which 70 cases of liquor were taken. The device is said to be the most ingenious ever caught here. — Image by © Bettmann/CORBIS